What happened to The Ultimate Fighter 20 cast? – Boxing.org

Rose Namajunas and Carla Esparza will meet in a rematch for the strawweight championship this Saturday at UFC 274. Their first title fight was the culmination of “The Ultimate Fighter 20” reality series that featured 16 women vying for the inaugural UFC strawweight title. And on Dec. 12, 2014, it was Esparza who submitted Namajunas in the third round to claim gold at The Ultimate Fighter 20 Finale in Las Vegas.

Now, in the rematch, it’ll be Namajunas putting her 115-pound title on the line against Esparza, who marvels at the fact that the two of them get to do this all over again.

“To be fighting the same person for the title, it’s wild,” Esparza said. “Going back to our ‘Ultimate Fighter’ season, a lot of the people from the show – some aren’t even fighting anymore. Some have retired; some are no longer with the UFC. So, it’s crazy that not only are we both still here, we’re fighting for the title. It just brings back a lot of memories from the first time.”

This begs the question: Whatever happened to the ladies featured on “TUF 20”? Below is a quick look at each cast member. 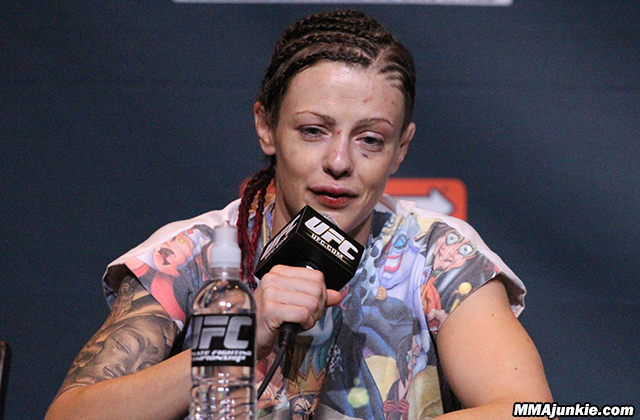 Now 35 and just Joanne Wood after marrying Syndicate MMA coach John Wood in late 2021, Joanne has 15 UFC fights under her belt and remains on the roster with a 7-8 promotional record. The Scottish fighter is experiencing the roughest patch of her career after losing three fights in a row – to Lauren Murphy, Taila Santos, and most recently Alexa Grasso in March – for the first time. 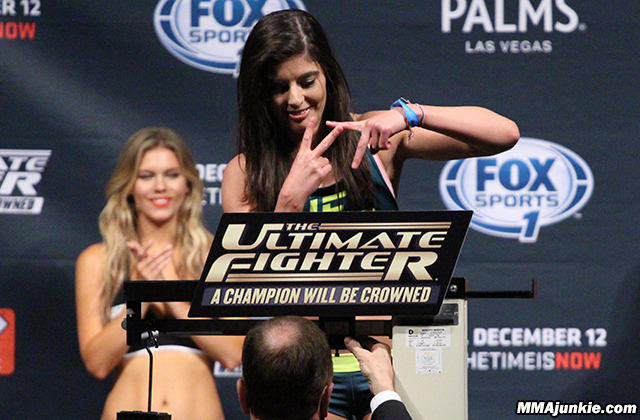 After the show, Chambers stuck around for five fights with the UFC, going 1-4, with her lone victory being a submission of Kailin Curran that earned her a Performance of the Night bonus at UFC Fight Night 65. Her final UFC bout took place Sept. 22, 2018 as she was choked out by Livia Renata Souza. Now 43, Chambers hasn’t fought since. 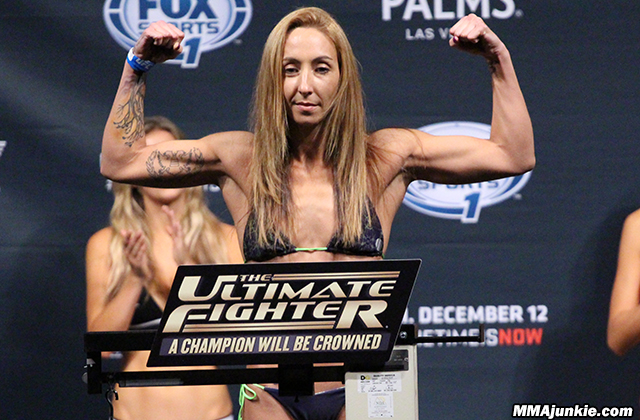 Clark ended up fighting three times for the UFC and went 1-2, beating fellow cast member Bec Rawlings at the TUF 20 Finale and losing to former title challenger Karolina Kowalkiewicz and Alexa Grasso. After an almost two-year hiatus, Clark returned on July 21, 2018 at Invicta FC 30 where she won a unanimous decision against Kinberly Novaes. The 41-year-old Clark hasn’t competed since. 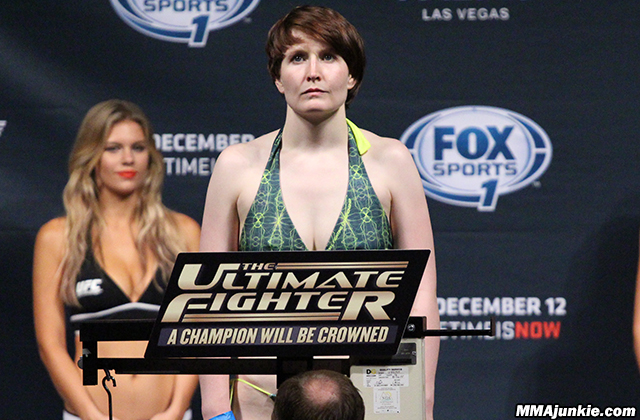 Daly, who trained out of SBG Ireland alongside Conor McGregor, had her career cut short following her stint on “TUF 20.” She went 2-1 in the UFC, with her last fight a win over Ericka Almeida in October 2015. On Jan. 30, 2017, Daly announced her retirement from MMA after medical tests revealed an abnormality in her brain. 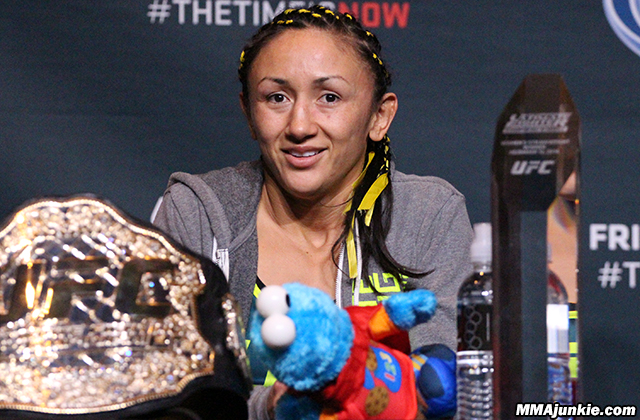 After defeating Namajunas to conclude TUF 20, Esparza lost the title to Joanna Jedrzejczyk in her next fight just three months later at UFC 185. What followed was mediocrity and a 3-3 record until Esparza’s remarkable turnaround began April 27, 2019 with a win over former Invicta FC champ Virna Jandiroba. That kickstarted a five-fight winning streak to make 34-year-old Esparza the No. 1 contender heading into her rematch with Namajunas at UFC 274. 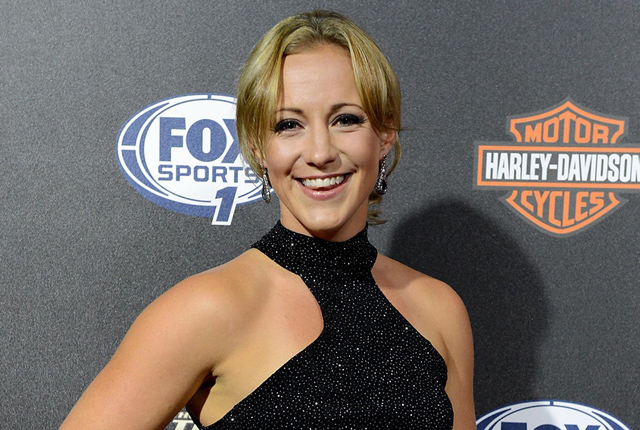 Ellis’ UFC tenure after “TUF 20” was brief – just two fights in five months, which she lost both to fellow castmates Felice Herrig and Bec Rawlings. After that, Ellis lost to Virna Jandiroba in November 2016 under the Fight 2 Night banner. The 39-year-old hasn’t competed since. 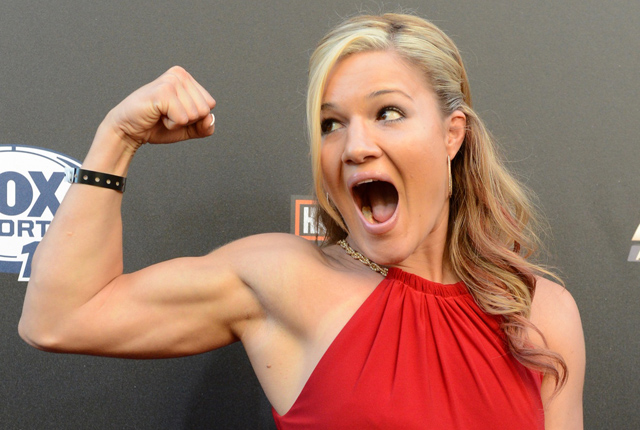 Herrig is still part of the UFC roster, but she’s fallen on hard times and bad luck. The 37-year-old hasn’t competed since losing by armbar submission to Virna Jandiroba in August 2020 at UFC 252. One month later, she announced she would be having a second knee surgery after repairing a torn ACL that kept her out for almost two years. It’s unclear when Herrig, who is 5-4 in her UFC tenure, will return to the octagon. 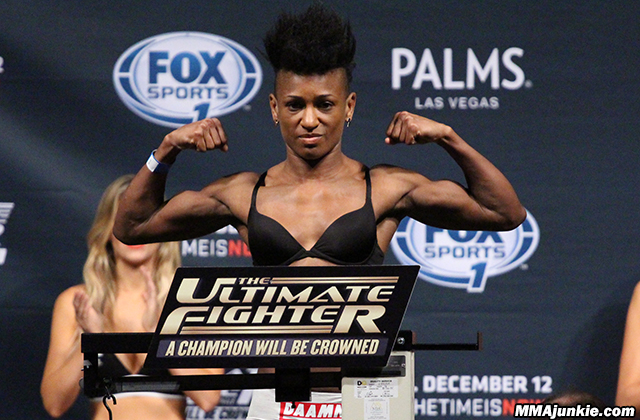 Hill, 37, has remained a staple in the UFC women’s strawweight division for the majority of the past seven-and-a-half years. After “TUF 20” concluded, she went 1-2 in the UFC with losses to fellow castmates Tecia Torres and Rose Namajunas, which sent her to Invicta FC for all of 2016. There, Hill went 4-0 and became the promotion’s 115-pound champion, earning her way back into the UFC, where she’s competed since February 2017. The closest Hill has come to title contention was after a three-fight winning streak in 2020, but her streak was snapped in a split decision loss to Claudia Gadelha. Overall, Hill is 8-11 in 19 UFC fights. 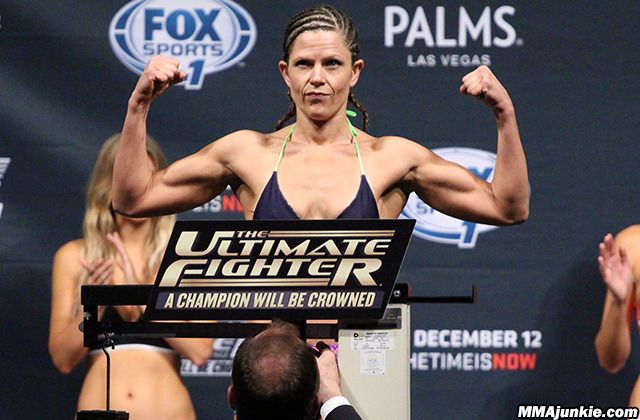 Kagan fought twice for the UFC after “TUF 20,” lost both fights and was released shortly thereafter. Now 40, her last fight was a submission loss to Kailin Curran on Dec. 10, 2015 at UFC Fight Night 80. 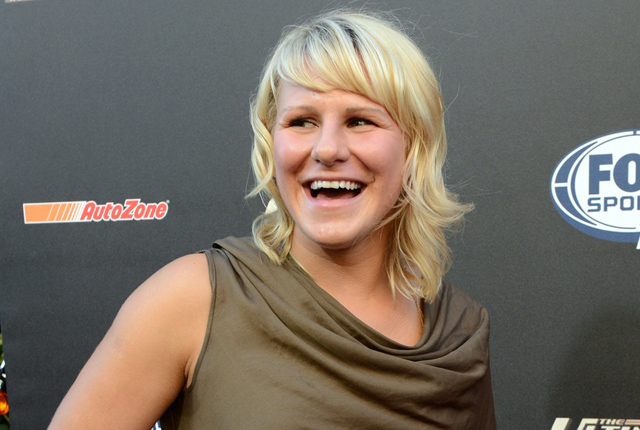 Kish never fought while she was on “TUF 20” because of an injury, but she spent all the weeks on the show. Now 34, Kish is still fighting – just not for the UFC – as she’s competed twice in 2022 for Bellator. Her first promotional bout was a loss to DeAnna Bennett, but she rebounded with a shocking unanimous decision win over former Bellator flyweight champion Ilima-Lei Macfarlane last month at Bellator 279. Kish’s stint in Bellator came about after she was released by the UFC; she had lost four of five at the time of her exit. She’s probably best remembered for losing control of her bowels and defecating during a loss to Felice Herrig at UFC Fight Night 112. 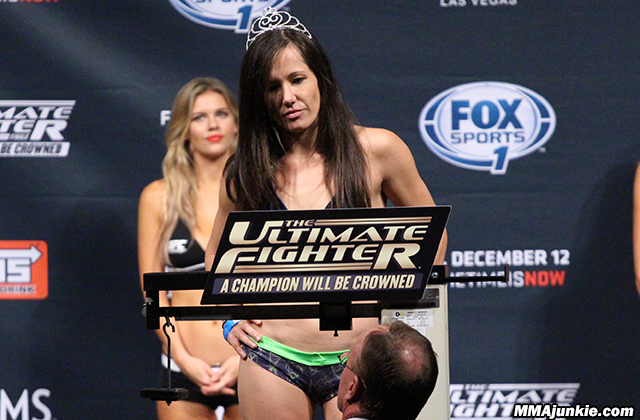 Magana competed three times with the UFC and lost all three bouts – to Tecia Torres, Michelle Waterson and Amanda Cooper – before she was released from the promotion. Magana also found herself at the center of drama during her UFC tenure when Cris Cyborg punched her at an athlete retreat in May 2017. After the UFC, Magana fought once for RIZIN FF and lost by submission to end her career on a six-fight losing streak. She was going to compete on a Combate Americas card in early 2019 but fell into a coma that lasted two days following complications from anesthesia during emergency spinal surgery in Puerto Rico. Now 38, Magana has remained out of the news since the ordeal. 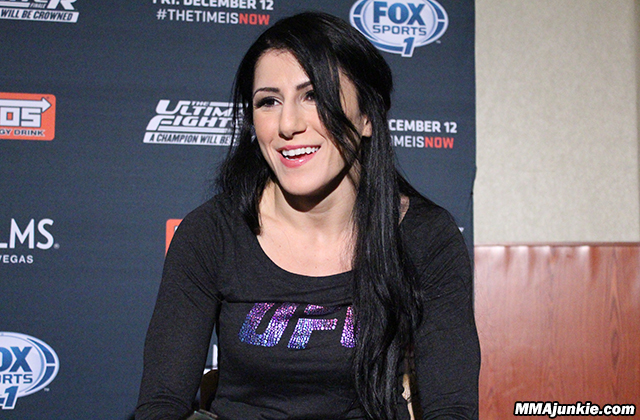 After “TUF 20,” Markos remained in the UFC until October 2021 when it was announced that her contract wouldn’t be renewed following a unanimous decision win over Livia Renata Souza at UFC Fight Night 196. That victory snapped a four-fight losing skid, but it was too little, too late to keep her around. Overall, Markos was 7-10-1 in the UFC. The highlight of her tenure came in 2017 when she won a split decision against former champion Carla Esparza. At 36, it’s unclear what Markos’ next move will be. 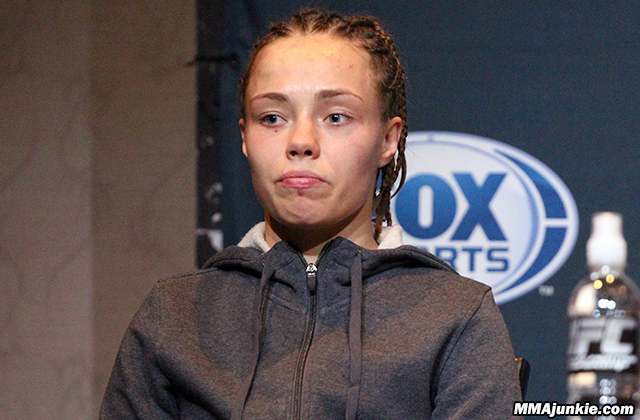 Namajunas, 29, has established herself as one of the all-time great women’s MMA fighters by becoming a two-time UFC strawweight champion. She shocked the world when she TKO’d Joanna Jedrzejczyk to claim gold the first time at UFC 217. Namajunas beat Jedrzejczyk in an immediate rematch to leave no doubt about her status before dropping the belt to Jessica Andrade by slam KO in May 2019. Fourteen months later, Namajunas avenged her loss to Andrade, who was no longer champion, with a hard split decision win in the Fight of the Night at UFC 251. That set up a shot against then-champion Zhang Weili, whom Namajunas knocked out with a head kick at UFC 261. Namajunas most recently beat Weili in an immediate rematch last November at UFC 268 to set up her title fight with Esparza on Saturday at UFC 274. Through it all, Namajunas has become one of the most polished strikers in MMA. 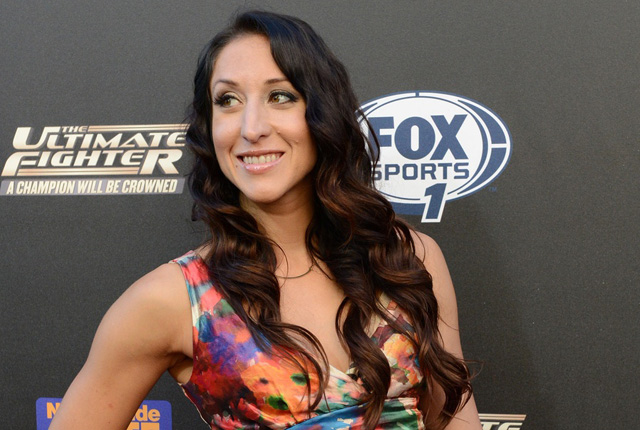 Penne, 39, has been through the ringer ever since “TUF 20” ended. She won her first UFC fight and earned a title shot against Joanna Jedrzejczyk, which Penne lost by third-round TKO. That result kicked off a three-fight skid and then her career was completely derailed by not one, but two U.S. Anti-Doping Agency violations. Her second violation initially earned her a four-year suspension, but she later proved that she didn’t knowingly take a banned substance and had her ban reduced to 20 months. In total, Penne missed out on four years of action from April 2017 to April 2021, and she has since returned to success – on a two-fight winning streak against Loopy Godinez and former title challenger Karolina Kowalkiewicz. 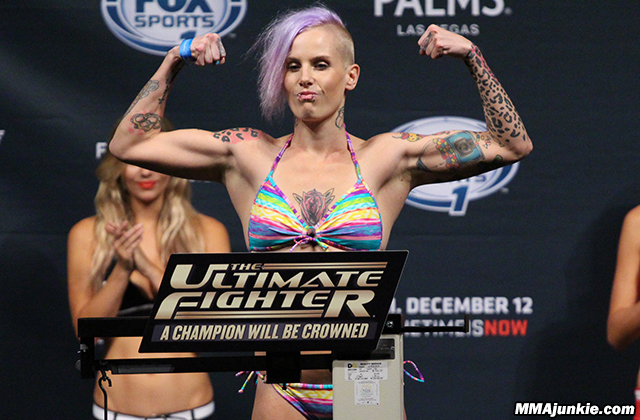 Rawlings didn’t find much success in the UFC after “TUF 20,” going 2-5 with the promotion, which included a four-fight losing streak. Since departing the UFC in 2018, Rawlings has competed in MMA for Bellator, going 1-1, and also for BKFC, where she’s 3-0 as a bare-knuckle fighter. Rawlings, 33, is slated to return to BKFC on May 13 against Britain Beltran. 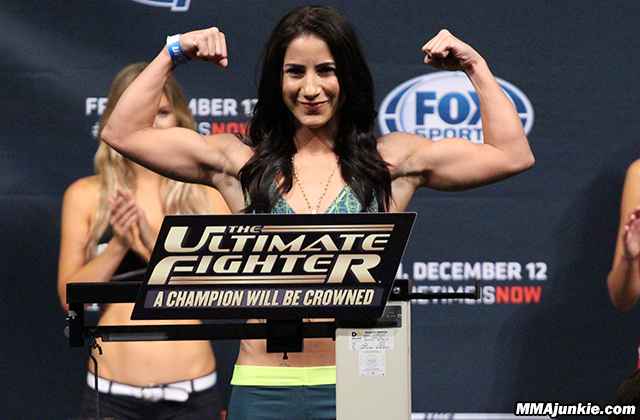 UFC 274 pre-event facts: Inside the numbers of an historic main card – Boxing.org